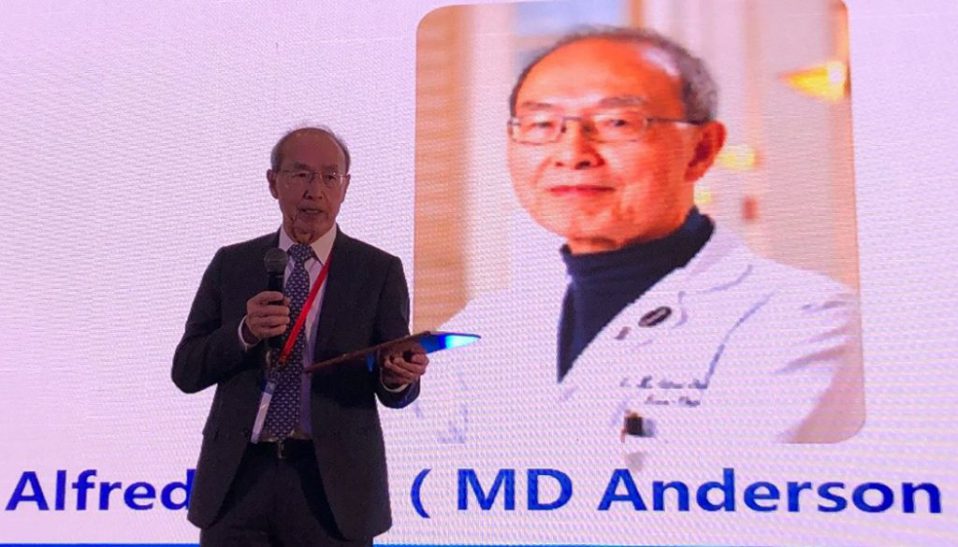 W.K. Alfred Yung, M.D., a brain cancer researcher and chairman of the Asian Fund for Cancer Research’s scientific advisory board, was last week presented with the 3rd Annual SNOChina Award for Outstanding Contributions of International Cooperation by the Chinese Medical Doctor Association’s (CMDA) Society for Neuro-Oncology (SNO). The presentation was made at the 3rd Annual SNOChina Conference in Xi’an, China. Announcing the honor were SNO Chairman Tao Jiang, M.D., Ph.D., and CMDA Secretary-General Wenbin Li, M.D., Ph.D., while bestowing it was AFCR Founder and CEO Sujuan Ba, Ph.D., herself the Award’s inaugural recipient.

At the March 15th Award ceremony, SNO’s Dr. Jiang acknowledged Dr. Yung’s career battling glioblastoma, the deadliest and most common form of brain cancer. This includes his co-discovery of the PTEN tumor-suppressor gene involved in glioblastoma’s progression, major roles in the application and regulatory approval of drugs targeting it and the conception, launch and guidance of GBM AGILE, an ongoing adaptive clinical trial aimed at squarely addressing the disease.

“Alfred’s brilliance, experience and untiring effort comprise an unparalleled, decades’ long contribution to the understanding of GBM and efforts to end it,” stated Dr. Ba, herself a board member of the Global Coalition for Adaptive Research (GCAR), the non-profit organization sponsoring GBM AGILE and on which Dr. Yung serves as executive vice president. “I couldn’t be happier than to have as illustrious a peer as Alfred recognized with this honor.”

Efforts by Doctors Ba and Yung have been instrumental in expanding GBM AGILE and other collaborative and highly impactful brain cancer research programs across borders, especially into China. Their respective 2017 and 2019 SNO China Awards have highlighted such cross-border contributions.

Your ticket for the: AFCR Scientific Advisory Board Chairman’s Brain Cancer Efforts Recognized