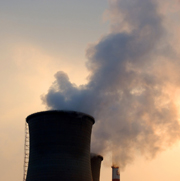 CORVALLIS, Ore., Feb. 8 (UPI) — Measures to control air pollution instituted in Beijing for the 2008 Olympics, if continued, could halve the risk of lung cancer for residents, a study says.

Researchers at Oregon State University say that could mean around 10,000 fewer lifetime cases caused by inhaled pollutants in Beijing, one of several cities in China that have unhealthy levels of air pollution from coal burning and automobile exhaust in the country's rapidly growing economy, a university release said Monday.

The study, conducted with Peking University in Beijing and published in Environmental Health Perspectives, is one of the first to study the health benefits of pollution-control strategies in a Chinese population.

The research looked at polycyclic aromatic hydrocarbons that result from almost any type of combustion, from a woodstove to a coal-fired power plant or an automobile's exhaust.

PAHs, of declining concern in the United States due to pollution controls and the move to cleaner forms of energy production, are a serious problem in the developing world with the advent of industrialization, population growth and heavy use of fossil fuels, researchers say.

China is now the leading emitter of PAH pollutants in the world, followed by India.

"PAH pollution was definitely reduced by the actions China took during the 2008 Olympics, such as restricting vehicle use, decreasing coal combustion and closing some pollution-emitting factories," Staci Simonich, professor of chemistry and environmental toxicology at OSU, said. "That's a positive step, and it shows that if such steps were continued it could lead to a significant reduction in cancer risk from these types of pollutants."

Your ticket for the: Cancer Risks of China Pollution Studied