Catechins: the Anti-Cancer Champion in Tea 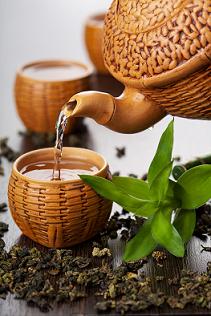 Drinking tea is an ancient tradition dating back more than 5,000 years in China and India. Long regarded in those cultures as a source of multiple health benefits, tea is now being studied for use in the prevention and treatment of a variety of cancers. Investigators are especially interested in the antioxidants – called catechins – found in tea.

Antioxidants are substances that neutralize oxidants-damaging compounds in the body that tamper with genetic material, alter cells, and even cause cell death. Many scientists believe that oxidants, also known as free radicals, contribute to the aging process as well as to the development of numerous health problems, including cancer. Like other antioxidants, the catechins found in tea selectively inhibit specific enzyme activities that lead to cancer; they may also target and repair DNA aberrations caused by oxidants.

Laboratory findings have shown that tea catechins act as powerful inhibitors of cancer growth in several ways: they counteract oxidants before cell injuries occur, reduce the incidence and size of chemically induced tumors, and inhibit the growth of tumor cells.

Studies conducted in humans relating tea consumption with cancer prevention are an active area of research. The results from the following completed studies are very encouraging.

Two studies in China, where green tea is a mainstay of the diet, resulted in promising findings. One study involving over 18,000 men found that tea drinkers were about half as likely to develop stomach or esophageal cancer as men who drank little tea, even after adjusting for smoking and other health factors (1). Another study at the Beijing Dental Hospital found that a daily consumption of 3 grams of tea, roughly equal to 2 cups, along with the application of a tea extract, has reduced the size and proliferation of leukoplakia, precancerous tissue that forms in the mouth (2).

The confirmation that food or beverage can prevent cancer requires many clinical studies. Because it seems that green tea may have a preventive effect on cancer, there are numerous clinical trials going on today – that will begin soon – to assess green tea or its extracts, such as catechin, on the prevention and treatment of various types of cancer.

Your ticket for the: Catechins: the Anti-Cancer Champion in Tea

Catechins: the Anti-Cancer Champion in Tea