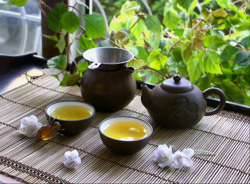 Research suggests that tea may help protect against cancer.   Below are some examples:

Colorectal cancer. Results on the effects of green tea on colon or rectal cancer are conflicting. Some research shows decreased risk in those who drink the tea, while others show increased risk. Further research is needed.

Lung cancer. Green tea polyphenols have been shown to inhibit the growth of human lung cancer cells.  However, few clinical studies have investigated the link and even these studies have been conflicting. One population-based clinical study found that Okinawan tea (similar to green tea but partially fermented) was associated with decreased lung cancer risk, particularly among women. A second clinical study revealed that both green and black tea significantly increased the risk of lung cancer. As with colon and esophageal cancers, further clinical studies are needed before researchers can draw any conclusions.

Ovarian cancer. Clinical research conducted on ovarian cancer patients in China, researchers found that women who drank at least one cup of green tea per day survived longer than those who didn’t drink green tea. In fact, those who drank the most green tea, lived the longest.

Prostate cancer. Research has found that green tea extracts prevent the growth of prostate cancer cells. In a large clinical study conducted in Southeast China, researchers found that the risk of prostate cancer declined with increasing frequency, duration and quantity of green tea consumption. However, both green and black tea extracts also stimulated genes that cause cells to be less sensitive to chemotherapy drugs. Given this potential interaction, sometimes physicians recommend that people should not drink black and green tea (as well as extracts of these teas) while receiving chemotherapy.

Skin cancer. The main polyphenol in green tea is epigallocatechin gallate (EGCG). Research suggests that EGCG and green tea polyphenols have anti-inflammatory and anti-cancer properties that may help prevent the onset and growth of skin tumors.

Your ticket for the: Does Tea Help Prevent Cancer?