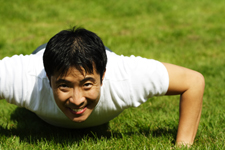 People who are already relatively lean are less likely to develop certain cancers if they perform higher daily physical activity, according to Japanese investigators. In a study involving 79,771 Japanese men and women ages 45 to 74, the investigators identified 4,334 incident cancer cases in 10 years of follow-up after a survey conducted in 1995-1999.

The investigators divided the population up into quartiles based on their daily physical activity level, which was derived from the metabolic equivalents/day score. When people in the lowest quartile increased their activity level, their cancer risk decreased significantly for both men and women. For men, the risk reduction was most marked for colon, liver, and pancreatic cancer; for women, the decreased risk was most marked for stomach cancer.

Your ticket for the: Exercise helps prevent certain cancers in lean people