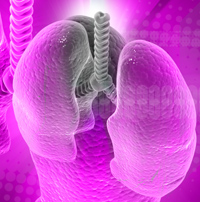 &A gene that may help explain why some non-smokers develop lung cancer has been pinpointed by researchers in the U.S., it was reported by AFP on Sunday.

Lung cancer is commonly believed to be the preserve of people who smoke or who have smoked.

Yet 10 percent of all lung cancer patients worldwide are "never smokers," meaning they have not smoked a single cigarette or their lifetime's tally is less than 100 cigarettes.

gt;The proportion is even higher in Asia, where between 30 and 40 percent of lung cancer victims are "never smokers."

Nearly two-thirds of the worldwide tally among "never smokers" are women.

Gene sleuths led by Ping Yang from the Mayo Clinic College of Medicine, in Rochester, Minnesota, have now found two telltale genetic variants in Chromosome 13 in a study of 754 "never smokers," with or without lung cancer.

Having these variants boosts the risk of lung cancer by nearly 60 percent, the study found.

The variants appear to suppress levels of a protein called GPC5, which plays a role in cell proliferation.

Further work is needed to confirm these findings and explore why "never smokers" develop cancer.

One theory is that someone with genetic vulnerability could develop lung cancer after a common, but as yet unidentified, trigger.

The paper is published online by the journal The Lancet Oncology.

Your ticket for the: Gene May Explain Non-Smokers Getting Lung Cancer