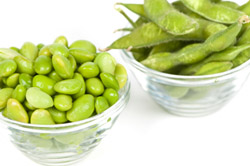 Asian-American women who ate higher amounts of soy during childhood had a 58 percent reduced risk of breast cancer, according to a study published in Cancer Epidemiology, Biomarkers and Prevention.

The current study focused on women of Chinese, Japanese and Filipino descent who were living in San Francisco, Oakland, Los Angeles or Hawaii. Researchers interviewed 597 women with breast cancer and 966 healthy women.

Researchers divided soy intake into thirds and compared the highest and lowest groups. High intake of soy in childhood was associated with a 58 percent reduction in breast cancer. A high level of soy intake in the adolescent and adult years was associated with a 20 to 25 percent reduction. The childhood relationship held in all three races and all three study sites, and in women with and without a family history of breast cancer. "Since the effects of childhood soy intake could not be explained by measures other than Asian lifestyle during childhood or adult life, early soy intake might itself be protective," said the study's lead investigator, Larissa Korde, M.D., M.P.H., a staff clinician at the NCI's Clinical Genetics Branch.

"Childhood soy intake was significantly associated with reduced breast cancer risk in our study, suggesting that the timing of soy intake may be especially critical," said Korde. The underlying mechanism is not known. Korde said her study suggests that early soy intake may have a biological role in breast cancer prevention. "Soy isoflavones have estrogenic properties that may cause changes in breast tissue. Animal models suggest that ingestion of soy may result in earlier maturation of breast tissue and increased resistance to carcinogens."

As provocative as the findings are, Ziegler cautioned that it would be premature to recommend changes in childhood diet. "This is the first study to evaluate childhood soy intake and subsequent breast cancer risk, and this one result is not enough for a public health recommendation," she said. "The findings need to be replicated through additional research."

Your ticket for the: Soy May Reduce Breast Cancer Risk