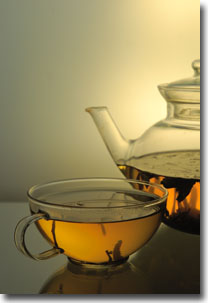 The evidence supporting the health benefits of tea grows stronger with each new study. To date, the most remarkable medicinal effects have been associated with cardiovascular disease, but there is mounting evidence that tea has cancer-fighting properties as well.

What Exactly is Tea?

Real tea—green, black, and oolong tea—all originate from the same plant, Camellia senensis. Green tea is the least processed form, produced by steaming fresh tea leaves, then drying them. To make black tea, the tea leaves are first exposed to air, causing them to oxidize. Oxidation turns them a deep brown color and intensifies the flavor. The leaves are then heated, dried, and crushed. Oolong tea falls between green and black tea; it is less processed than black tea but more processed than green tea.

Tea as an Antioxidant

Green, black, and oolong tea are excellent sources of polyphenols—plant chemicals (phytochemicals) with powerful antioxidant properties. In particular, real tea is rich in flavonoids, a subclass of polyphenols, which includes the phytochemicals most commonly associated with tea in the popular press: catechins and thioflavins. In contrast, erbal teas are derived from a variety of plants other than Camellia senensis and do not contain the flavonoids found in real tea.

Antioxidants help protect the body against disease by counteracting the harmful effects of free radicals—stray, highly reactive particles that accumulate in the body as byproducts of normal metabolism. Free radicals injure surrounding cells in a process called oxidation. Left unchecked, they can damage DNA, potentially causing cancer. Antioxidants, such as vitamins C and E and betacarotene, are free radical scavengers.With regard to the antioxidant properties of tea, research at the University of Kansas reports that green tea is 100 times more potent than vitamin C and 25 times more potent than vitamin E at protecting cells from damage linked to cancer, heart disease, and other illnesses.What’s more, despite the differences in how they are prepared, research indicates that black tea contains just as much of the protective phytochemicals as green tea. In one study that measured the amount of flavonoids in the bloodstream, researchers found that green and black tea boosted levels by nearly identical amounts.

Most of the data supporting the anticancer benefits of tea are derived from animal studies, in which the animals were treated with amounts of polyphenols equivalent to the amount consumed by regular tea drinkers.

Overall, the evidence is strongest for cancers of the oral cavity, stomach and colon. For example, one study in rats conducted at Oregon State University found that both green and black tea inhibited the formation of precancerous lesions in the colon.

A few animal studies link tea with a decreased risk of lung and skin cancers. In one study of mice and rats, researchers at the American Health Foundation found that both green and black tea as well as caffeine given in drinking water protected the animals against lung cancer caused by a potent carcinogen found in tobacco. Another study in mice found that both green and black tea inhibited the growth of malignant and benign skin tumors.

Results from studies in humans have been less consistent but still suggest that tea has anticancer benefits. For example, a study of more than 35,000 postmenopausal women in Iowa found that women who drank two or more cups of tea daily were less likely to develop cancers of the digestive and urinary tracts. No protection against other cancers was found, however.

In one Chinese study, 931 patients newly diagnosed with cancers of the colon, rectum, or pancreas were interviewed about their lifestyles, medical history, and dietary habits, including tea consumption. They were compared with people of the same ages who did not have cancer. The results indicated that men who were regular tea drinkers (defined as one cup per week for six months or longer) had an overall lower risk of cancers of the rectum and pancreas, compared to those who were not regular tea drinkers. The study did not find a difference in colon cancer risk among men, but it did for women. The researchers noted a dose-response effect, which means the greater the tea consumption, the lower the cancer risk.

A large Japanese study also looked at the effect of tea on cancer. In this study, researchers surveyed 8,552 people over age 40 about their living habits, including daily consumption of green tea. During the nine years of follow-up, they found a 43 percent reduction in cancer risk among women and a 32 percent reduction in men who drank 10 or more cups of green tea per day compared to those who drank fewer than three cups daily.

Of course it is premature to state that tea drinking can definitely reduce the risk of cancer, but tea has become a promising new area of research. Indeed, high tea consumption might one day explain why lung cancer rates in Japan are only half those in the United States, despite the fact that the rate of cigarette smoking is nearly twice that of the U. S.

How Much Tea Should You Drink?

Early research indicates that anywhere from one to four cups of green or black tea a day is a good preventive dose. Some preliminary evidence suggests that even just one cup a week of green tea may reduce cancer risk.

Keep in mind that green, black, and oolong tea contain caffeine (about equal amounts), which may act as a diuretic and can disrupt sleep. Eight ounces of tea brewed for 3–5 minutes contain about 40 milligrams (mg) of caffeine, compared with about 100 mg in a cup of freshly brewed coffee. The good news about the caffeine in tea is that emerging data suggest it may also be slightly protective against cancer.

Your ticket for the: Tea: The Latest Weapon Against Cancer