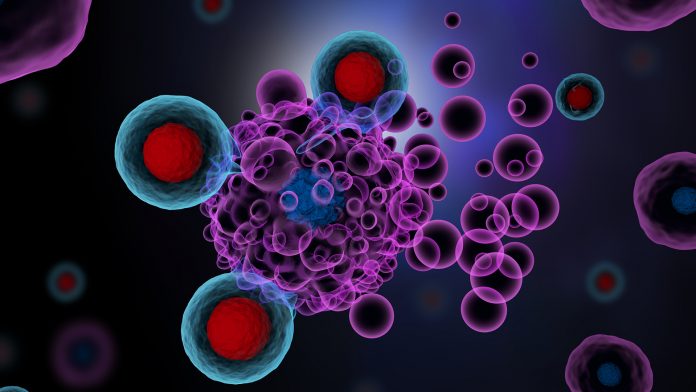 Colorectal cancer (CRC) is the second most common cause of cancer in women and the third most common in men worldwide. Based on rates from 2007-2009, 4.96% of men and women born today will be diagnosed with CRC at some time during their lifetime. The incidence of CRC has been increasing in China. During 2003-2007, CRC was the third most common cancer with the incidence of 28 cases per population of 100,000. Moreover, CRC was the fifth most common cause of cancer death with the mortality rate of 13.41 deaths per population of 100,000. Therefore, it is critical to identify key molecular events underlying CRC development and progression that can be potentially used as prognostic markers or therapeutics targets.

Professor Wei Zhang discovered 10 years ago that a gene on chromosome 1p36 made a protein called MIIP – which stands for migration and inhibitory protein – and was involved in inhibiting cancer cell’s first “spreading “ steps when it moves or migrates from a primary tumor and invades nearby healthy tissue. Recently, his team has shown that a deletion of a chromosome, 1p36, where the gene for protein MIIP resides, is associated with spreading of cancer and a poor outcome in Caucasian CRC patients. Using tissue samples from CRC Chinese patients stored at the NFCR-TMUCIH Joint Tissue Bank, the researchers used antibodies and found that reduced MIIP expression in the samples was associated with patients who experienced metastatic cancer and poor survival.

These results show that deletion of the MIIP gene from the chromosome is associated with the progression of spreading CRC in Caucasian and Chinese CRC patients, suggesting that when MIIP is intact and expressed, it is an important “tumor suppressor gene.” In cancer genomics, more definitive results are needed to clearly state that MIIP deletion is a cause of increased cancer metastasis in CRC.

The scientists will use next-generation sequencing on the samples to identify mutations in BRCA1 and BRCA2, as well as 24 other genes that have been shown to confer increased risk for cancer. In addition, they will explore if hereditary epigenetics changes are present—these are alternations that would direct a cell to add small molecular additions to a gene that can turn its expression on or off.

With funds from AFCR, Professor Zhang’s team will set out to definitively prove that loss of MIIP gene is a cause of CRC genome instability and enhanced metastasis. To achieve these important research results, the scientists will use at least two complex tumor models of CRC in their experiments. The MIIP gene will be removed or “knocked out” of the cells by genetic engineering to show that when it is absent, CRC will spread or metastasize. If the results of these crucial experiments are as expected, together with the results from patient’s samples from the TCGA and the NFCR-TMUCIH Joint Tissue Bank, definitive evidence will be provided that MIIP is an important tumor suppressor gene in CRC.

In addition, MIIP deletion from the chromosome leads to “genome or chromosome instability,” which is a hallmark of cancer and very important in the prognosis of CRC. Another important finding by Professor Zhang regards a potential new treatment option for CRC patients with the MIIP deletion. His team has shown that MIIP deletion sensitizes CRC cells to a type of therapeutic agent, providing a potential new targeted treatment for CRC. Professor Zhang’s team will further validate this initial finding using clinical samples both from TCGA and NFCR-TMUCIH Joint Tissue Bank. Funding from AFCR will be critical in completing these studies.

Spreading or metastatic cancer is the most serious issue facing all cancer patients. In both the US and China, it is critical to identify key molecular events underlying CRC development and progression. Using the most advanced tools and precious clinical samples at their side from the NFCR-TMUCIH Joint Tissue Bank, Professor Wei Zhang and his team of international collaborators are on the verge of establishing that MIIP is tumor suppressor gene. If they can show this, MIIP can serve as a prognostic marker to help doctors choose the best treatment approach for their patients. Moreover, MIPP may serve as a target for the development of new therapeutic approaches to stop the spread of CRC.

Your ticket for the: Colorectal Cancer Research